Buried pipe networks represent more than 80% of the total asset value for water distribution and therefore their management is an important issue for water utilities.

The service life expectancy of pipes can be long – there are pipes laid over 150 years ago still performing adequately. Conversely, because of their material, installation conditions, hydraulic regime, environment or water quality, certain newer pipes are decaying and need to be replaced earlier.

INRAE proposes approaches and tools which are seen to help the decision makers from the data collection stage to the pipe rehabilitation decision stage.

The “asset management” team at INRAE-Bordeaux has studied the ageing of networks for more than fifteen years. The chosen approach consists of estimating for a future period, the number of breaks for each pipe by using data describing the pipes, their environment and their break history.

In 1994, Patrick EISENBEIS proposed a statistical method inspired from epidemiology. It involves a multi-parameter probabilistic approach for calculating the time between two breaks as a function of the pipe characteristics and its environment, according to a Weibull law.

In the frame of the European research programme CARE_W “Computer Aided Rehabilitation of Water Networks” which was carried out between 1999 and 2002, the pertinence of the model was demonstrated and led to the development of the prototype software: Care_W-PHM.

In the continuation of this work, Yves LEGAT developed a new break prediction model in his thesis. It involves a statistical model based on a counting process and relies not only on the pipe’s characteristics and environment but also its age and previous breaks. The model is a linear extension of the Yule process: LEYP.

This model has been applied with success to several networks in France and abroad. It performs as well as the previous model in creating a hierarchy of at-risk pipes but also provides a better estimation of the number of breaks predicted. This new model was therefore chosen to be used in the development of the break prediction software, “Casses”.

The data used by the software are the description of the pipes in the network and the break history for each pipe. The software has been developed to cope with the diversity of available data for different utilities. Besides the obligatory data (pipe installation date, pipe material and length and corresponding break dates), the software is able to handle the majority of different data collected by utilities (soil corrosivity, traffic, depth, etc.).

The main result from the software is the number of breaks for each pipe for a period in the future.

The first step in a project is to import the data. Importation checks analyse the data content. A report is produced to detail any eventual anomalies encountered.

The main window allows access to the data by means of tables representing the distribution of pipes and breaks as a function of the different attributes.

At this stage, the user can create sub-groups of pipes and breaks to be studied and create new covariates based on existing ones.

An assistant guides the user through the different steps necessary to make a prediction.

For the calibration of the statistical model, the user is aided by an advice module that allows insignificant covariates to be eliminated.

The results of the calculations can be visualised and data imported and exported. 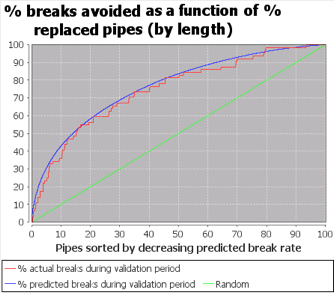